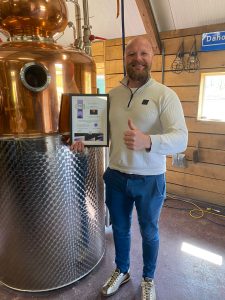 From bakery to main contractor, to transport company, to gift specialist and World Whiskeys Award winner in 2022. In recent weeks, the MVO Quality Mark Committee has suggested that the acceleration could be a little slower. However, the increasing attention for CSR from clients, suppliers and consumers urgently requires ISO 26000 assessments. Now it was the turn of Distillery De Bronckhorst from Doetinchem. After an excellent assessment, the CSR Quality Mark was awarded to the founder who recently won a Golden Award in San Francisco.

For the Bronckhorst, CSR is central to the entire process of distilling drinks. For example, all the waste is reused, the ash for the land and even fruit that is tarnished is distilled into 'Apple eau-de Vie.' In the field of CSR Suppliers, Legters works together with HV Reintegration & Care BV and the CO2 emissions are also at a low level at this company.

It almost takes the storytelling subject to fully explain the story. Owner Legters has summed up the origin of the organization in the powerful term 'from cow to grain, from grain to drink.' It may describe the Achterhoek coziness, but certainly also the entrepreneurial mentality of De Bronckhorst. The distillery ensures that the entire process is kept in-house.

Nature and craft come together, first of all the owner keeps rare Dahomey cows that are kept free of antibiotics and medicines. To the layman, these cows are easy to distinguish from Western cows, although they do look very similar, this African cattle breed is a lot smaller than its cousin. Heifers are only 80 to 90 cm tall, bulls 90 to 100 cm. In the process, the healthy manure from these cattle is spread on De Bronckhorst's own arable land. This is where the barley for the Dahomey Single Malt Whiskey and the Old Dutch Jenever comes to maturity.

Impression of the winnings of the winner of the World Whiskeys Awards: Dahomey Dutch Whisky.

It is therefore the Whiskey Dahomey Dutch Single Estate that has acquired international fame in San Francisco. Global demand for the big winner of the World Whiskeys Awards has resulted in no bottle or sample of the production being available anymore. With this, Mr. Legters has delivered a major achievement in which sustainable production has also earned its crown. Demonstrable, measurable and crownable, the double congratulations of the MVO Quality Mark Committee are therefore conveyed to Distillery De Bronckhorst!